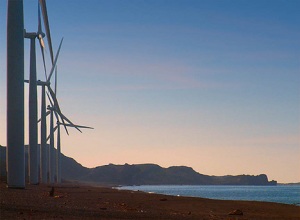 Here’s a post that might equally well be entitled ‘better late than never’; I’ve finally got around to looking at this year’s data from Bloomberg New Energy Finance contained within the UNEP-SEFI global trends report. It’s fascinating and puts in context the last post on this blog which focused on the demise of emissions target-setting.

But it’s the detail rather than the aggregate data that’s of interest. China is now the number one destination for sustainable energy finance and has knocked the US off the top slot. In 2009, China installed almost 14 gigawatts of wind power, into which investors put $27.2 billion of mostly asset finance. China’s current target for installing wind power in 2020 is 30GW but since 25.8GW has already been installed, this target now looks more than attainable and there is already talk in Beijing of hiking the target to 150GW. Remember ‘feeling the stones‘?

Not to labour the point, but China also now manufactures nearly one-third of the world’s solar panels; its Longyuan Power Group floated its solar business on the Hong Kong stock exchange in 2009, raising $2.6 billion in the process. In fact, while the raising of sustainable energy finance on public markets is still small beer, the story beneath the headline $14.1 billion total is the staggering 2984 per cent increase in activity in Hong Kong (clearly heavily influenced by Longyuan, but still significant at a time when the equities are pretty unfashionable).

For those struggling with leaden-footed UN negotiations, herein lies hope of real, tangible progress. Last year, Professor Jihua Pan and team at the Chinese Academy of Social Sciences, in a study for the Global Climate Network, modeled the job creation potential of clean energy technologies. They found a possible one million job opportunities in China as a result of installing 150GW of wind power by 2020. Might that help with the politics?

Ultimately, success in tackling climate change will be measured in parts per million of carbon in the atmosphere and degrees of average global temperature increase. But at this point in time, never mind the grand targets; feel the stones.

(The first commentator to argue that the problem is not China but the US wins a guest post).

2 responses to “Never Mind The Targets, Feel The Stones”