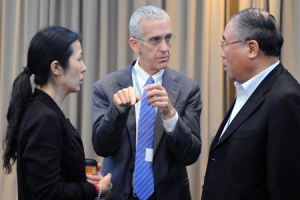 The Durban climate summit produced a surprise (or at least a surprise for natural pessimists like me…). A consensus agreement has been reached to open a new phase of negotiations, to be finished by 2015 at the latest, with targets for all countries kicking in from 2020. Given initial positions of the most powerful actors, this outcome looks  impressive, and is indeed a testament to the diplomatic skills and stamina of those pushing for a deal. Although the international climate negotiating process would have re-started at some point, what is surprising is that it has come so soon, when we are looking at recession in much of the OECD and slower growth in the emerging economies (throughout the talks, the headlines have been about the Euro crisis, not the climate talks).

But take a look again, and the glass begins to look half empty. First, as many commentators point out, this agreement pushes legally binding action to reduce emissions so far into the future that it may well be too late to prevent warming of 3-4C. Second,  it’s important to remember that Durban was talks about talks, in which the only commitment made was to keep the international process alive. This is a bit like the opening of the Doha Round of trade negotiations in 2001, which are still shuffling forward, zombie-like, 10 years later. We do not know what will happen over the course of these new climate negotiations (which in the US could mostly happen under a Republican administration). Third, Scott Barrett’s classic analysis suggests that if a new agreement has the same structure of the Kyoto Protocol, it is likely to be too weak to be effective, but there is every reason to think that the focus will continue to be on targets, rather than incentives or enforcement (although see below). Last, a new agreement will have to be implemented, and especially if it has weak enforcement mechanisms, whether it can be enforced will depend heavily on domestic politics.

The interesting question at this stage is why agreement to negotiate a new agreement was reached, and especially why the two key players, China and the US, came on board. Clearly, the EU, G77 and AOSIS were the prime movers, but there would have been no meaningful deal without the big 2, and so far the climate imperative has not been powerful enough for them to overcome other forces. Of course part of the answer is that this agreement doesn’t require much of anyone. There are no emissions reductions targets, and no enforcement mechanisms. The US and China (and anyone else) could walk away from negotiations at any point (and they may well yet do that). But at least one important new principle lies at the heart of the new agreement – that new negotiations will lead to targets that will apply to all countries, and not just the current Annex 1 group, even if it is still ambiguous as to whether those targets will be legally binding. This is what the US wanted, so it is perhaps not hard to understand in the end why Todd Stern signed. But why did China agree, since it, along with India, has been the strongest voice against this principle?

The answer may lie in the possibility that the incentives in the collective action problem are slowly but surely shifting. In most accounts of the climate collective action problem, including Barrett’s, the incentives are to free-ride, because there are up-front costs to reducing emissions, while benefits are distant in time and uncertain. However, it is clear that for China at least, the incentives may now be changing. China has sunk considerable effort and cost into developing clean energy industries (and jobs), from wind and solar to electric vehicles, and it is even now beginning to show a bit of interest in carbon capture. To get a pay-off from this investment, China will need secure markets for these technologies abroad, so it does need the rest of the world, and especially OECD countries, to adopt sufficiently credible targets to drive those markets, which in the end means a meaningful international agreement. This will come at a domestic cost, because to achieve it (and especially America’s commitment), China will also have to sign up to binding targets. But China’s leaders may well see this as an acceptable cost, especially since reducing emissions can also offer energy security and local polllution co-benefits.

Filed under China, Durban, US

Tagged as China, Durban, UNFCCC, US

2 responses to “Talks about talks”