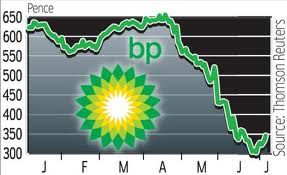 I’ve just been to a presentation of BP’s Energy Outlook 2030. This was launched in January, but has only just reached us here in the South Downs. BP’s head of energy economics, Paul Appleby, got something of a rough ride from the assmbled, mainly student, audience, about BP shirking its responsibilities by not pressing politicians to do more on climate policy. The predictable defence is that BP takes the climate issue seriously, but is meeting its customers needs for fossil fuels, is accountable to its shareholders, can’t do things that means it will operate at a loss, and that ultimately governments have to make public policy.

I have some sympathy with this position – BP is a company and it’s doing what you’d expect a company to do. But it’s a position that implicitly raises an interesting deeper question.

As a way in to the issue, think about what BP is now most famous for – the Deepwater Horizon oil spill and the massive pollution of the Gulf of Mexico (by the way, BP seem to have responded to it’s previous apparent lack of attention to safety by going to the other extreme – when I went to the January lauch of the 2030 report at its St James Square headquarters, I was told it was company policy that you had to hold on to the handrail while climbing the stairs!). BP agreed to establish a $20 billion claims fund to compensate those affected by the spill. Couldn’t you say that a much larger fund should be established to pay compensation for all those (mostly at the moment in poor countries in developing countries) whose livelihoods are being eroded by climate change? After all, isn’t it just another form of pollution?

The difference between the two cases is that, in the Deepwater Horizon case, the accident was caused by a failure to observe safety and agreed environmental standards. BP was seen as having broken the law. By contrast,  drilling oil and selling petrol to people to burn in their cars is not only not illegal, it is actually pretty central to modern life, in the West but increasingly in China and other places. Not only do governments condone it, the vast majority of people are guilty of doing it.

But if we have to say that the responsibility for the impact of oil on the planet is not BP’s alone, what we can object to is that some people are making a lot of money in the process, money which is neither being put towards compensating the losers from climate change nor towards low carbon solutions.

The underlying issue is not whether BP is doing the right thing or not (it’s a plc after all), but whether oil, gas and coal production and sale should, in the era of climate change, be a for-profit activity at all. Surely, placing responsibility for the fossil fuel industry in public hands would make accountability much more direct, and allow the application of profits to mitigation and adaptation much easier. After all, the Norwegians already do it. This policy wouldn’t be particularly popular with the City, and care would have to be taken to ensure that socialised oil companies would be well run. But climate change really is a new kind of problem, and just as public ownership of companies was used in the past to met social objectives (e.g. through cross suibsidised pricing), should we start thinking about using it now to meet environmental objectives?

2 responses to “Beyond private petroleum?”