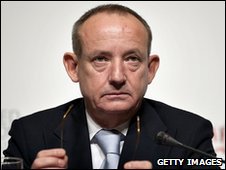 Yvo de Boer has announced that he is to step down as head of the UNFCCC’s secretariat. One quick thought: Appoint a successor from a developing country!

Just as the WTO’s secretariat has always been seen as close to the European Commission, so the UNFCCC is increasingly perceived as a Eurocentric administration, not least because it’s based in Europe.

If the geo-politics of climate change are to be transformed, then as well as paying more attention to the debate at the domestic level – the mantra of this blog – there also needs to be more trust in the negotiations.