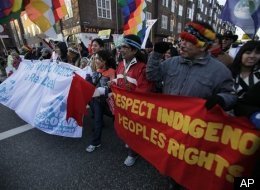 Our letter is published in the Financial Times in response to Fiona Harvey’s commentary on the role of green groups in Copenhagen. Note: you may need an FT subscription to follow these links

Sir, Fiona Harvey is harsh on green campaigning groups whose members worked hard to raise the issue of climate change up the international agenda (‘Green is the colour of climate discord’, January 29), but she nevertheless has a point about the Copenhagen climate summit. The United Nations negotiations that led up to Copenhagen have always been and still are conducted in a green bubble, even if more than 100 leaders felt the need to attend on this occasion.

At the moment, the important countries appear supportive of the accord struck in Denmark. But it’s difficult to say whether this process is the formation of a new wave of climate talks or merely a ripple of political expediency resulting from leaders needing to leave Copenhagen with something to show for their trip. The underlying reality is that, in spite of all the attention the issue has received in recent months, opinion polls consistently show that climate change remains a low priority for most people – especially in the US where support for action is so critical.

Thus, while green groups may be asking for too much and governments may be promising too little, the politics of climate change are tough. This calls for an urgent reframing of the issue in terms that matter to people now: less dependence on oil, investment in renewable energy, renewed economic growth as a result of innovation, jobs, and security.