The politics of carbon pricing 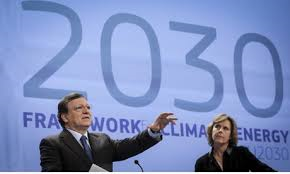 The anti-renewables bandwagon is rolling ever faster. This started some time ago, but has now started to bite on policy, as seen in the EU’s 2030 proposals which contain no binding renewables target. There is an emerging view, to be found especially amongst economists (including The Economist) and on the centre-right (as opposed to the hard right anti-all climate policy view) that the focus should shift away from renewables support and back towards carbon pricing. Carbon pricing, the argument goes, will deliver emissions reduction at least cost. The implication is that, because it will be much cheaper than renewables, it will be politically a lot more popular, or at least easier.

I see two reasons for thinking that it’s not as simple as it seems, and that putting all hope in carbon pricing and backing off from renewables policy may run into trouble.

The first is that making either emissions trading schemes or straightforward carbon taxation work raises a number of technical and political economy problems. With a fixed supply of allowances and relatively inelastic demand in the short-term, you’d expect prices to be volatile, and the history of the EU emissions trading scheme show this to be true. It may be possible to provide a fix for this, which is what the 2030 package proposes, but it is striking that a problem that would be obvious to a first year economics undergraduate has gone unaddressed for the first 9 years of the EU ETS. A second issue is that carbon markets have provided a lot of rent to corporate participants where they have received allowances through grandfathering and have then been able to pass carbon costs through to consumers. Auctioning of permits still only covers 50% of permits in Phase III.

In the UK, the power sector has 100% auctioning. However, there is another problem with carbon pricing in the power sector. In a power market where the price of electricity is set by the cost of the marginal plant, all generators will earn the price, and thereby intra-marginal rent. Carbon pricing will raise the price where a fossil fuel plant is the marginal plant (which it always is). Where allowances are allocated free, this leads to windfall profits for electricity companies, and this indeed was the case in the early part of the EU ETS. With auctioning, these profits are reduced, but the effect on consumer price remains. The fact that consumers are effectively paying a carbon price for all electricity, no matter whether it is high or low-carbon, means that from the consumer point of view, effective carbon prices are pretty high. A Dutch study estimates that a carbon price of €80/tCO2 would mean that consumers are paying an effective price of €487/tCO2, in the range of solar PV.

All of this might lead one to drop emissions trading schemes and support carbon taxes instead, as Dieter Helm does. However, carbon taxation is also problematic, mainly because of the challenge of establishing parity across countries in the EU. Tax harmonisation has proved very difficult. In addition, if carbon taxes are imposed on generators in the power sector the issues above still apply.

The second issue is the raw politics of carbon pricing. I’ve argued before that an important factor in understanding climate and energy policy is the political effects of those policies (sometimes called “policy feedback”). As far as I can see, carbon pricing is dominated by negative feedback effects. It is seen as a tax (whether or not is explicitly is one), in an era when tax is highly unpopular. It involves transfers either to large unpopular energy corporations (if there is grandfathering and pass through) or to the state (if there is auctioning). On the first count, the public lose out and gain nothing. On the second count, much of the public would feel the same. This leaves public support almost entirely to the environmentally minded public and the green movement, which (in the UK at least) are not large or powerful enough to guarantee political sustainability as the price/tax rises. In any case, these groups tend to be suspicious of trading and prefer renewable support policies. The political difficulty with carbon pricing or taxes can be seen across the world, from France (which tried to introduce a carbon tax in 2009) to Australia.

The main way to change this situation is to create a positive feedback effect through hypothecation of auction revenues, say on energy efficiency programmes, which would create winners amongst the public both from programme recipients and employment. This kind of move was important in creating and maintaining support for congestion charging in London. But it remains rare for the Treasury to allow hypothecation, and it is not at all clear that this would happen; certainly George Osborne seems to be far more interested in using Carbon Price Floor revenues to reduce the deficit.

Against all of this, renewables sceptics would point to the fact that renewables are an expensive way to reduce carbon, and that they are not exactly politically unproblematic. This is true, but as I have argued before, the political problems that renewables face in the UK are heavily bound up in the design of the policy adopted here, which has ended up with most of the rents from renewable support mechanisms going to large companies rather than the public, and the absence of any industrial policy meaning that relatively little employment has resulted. Germany’s renewables growth has cost it around 4 times as much as Britain’s, as  a proportion of GDP, but it remains politically far safer. There is debate about the costs in Germany, but there is also a much greater consensus about maintaining the direction and pace of change. This is reflected not least in Germany’s strong advocacy for a 2030 EU renewables target and the UK’s equally strong opposition.

In the end, the total cost of a measure to society isn’t the whole story. The distribution of costs (and rents) matters a lot politically. The economist’s “first best” policy solution may be politically unfeasible, and second best but feasible approaches are what really count. From this point of view, advocates of carbon pricing – who do tend to be economists – need to get more serious about the politics.

2 responses to “The politics of carbon pricing”