The politics of climate change – where are we? 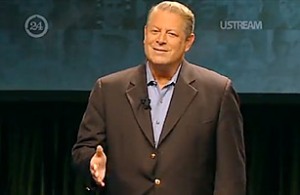 Bryan Walsh’s piece on Al Gore’s reality versus everyone else’s in Time magazine is an excellent precis of the current politics of climate change. He even gets the UK picture about right; the default position for US environmental writers is to assume European climate policy is a done deal. That said, the Cambridge Econometrics study Walsh points to isn’t the most obvious example. The screaming hyperbole of the Daily Mail (no link; the Mail doesn’t need our traffic)  – copies of which we managed to get hold of even in Tuscany – and the energy prices backlash is where the politics currently reside.

Thus Gore’s Climate Reality gig, though no doubt heroic, seems curiously at odds with the current mood. A disastrously crap summer in Europe – from any standpoint you care to choose – will almost certainly push us into a chilly winter of deep discontent, where the Mail’s version of reality will be much closer to most people’s than Al Gore’s. In this context, we won’t so much be concerned about climate sceptics as about the widely shared lack of interest in the realities of a changing climate.

In facts it’s wrong to argue that people don’t care about climate change and that they don’t want to pay towards climate policy. On the contrary, in IPPR’s recent consumer workshops (in fact focusing on renewable heat and so buried in this report) there was no repetition of the climate sceptic line, much support for ‘doing something’ and a willingness to contribute. But many people’s attention is likely to be focused elsewhere.

The challenge for campaigners and Al Gore is to take the debate to where people are and not continue to argue as if most people would make a priority out of tackling climate change if only they knew the truth about the science. It didn’t work during the good times and our times are not good any more.

One response to “The politics of climate change – where are we?”